“I KISS’D THEE ERE I KILL’D THEE: NO WAY BUT THIS; KILLING MYSELF, TO DIE UPON A KISS” – Othello (Act V, Scene II)

Death of a Salesman – Arthur Miller

“You can't eat the orange and throw the peel away - a man is not a piece of fruit.”

Tess of the D’Urbervilles – Thomas Hardy

“A strong woman who recklessly throws away her strength, she is worse than a weak woman who has never had any strength to throw away.”

Students study three texts from the following list: one post-2000 prose text, one pre-1900 poetry text and one further text. They also respond to an unseen passage in the exam. The unseen extract can come from any of the genres of poetry, prose or drama and can include literary non-fiction.

When Will There Be Good News? – Kate Atkinson

“Their mother was cut down where she stood, the great silver knife carving through her heart as if it was slicing butcher’s meat.”

“He knew not justice, and he laughed at law.” 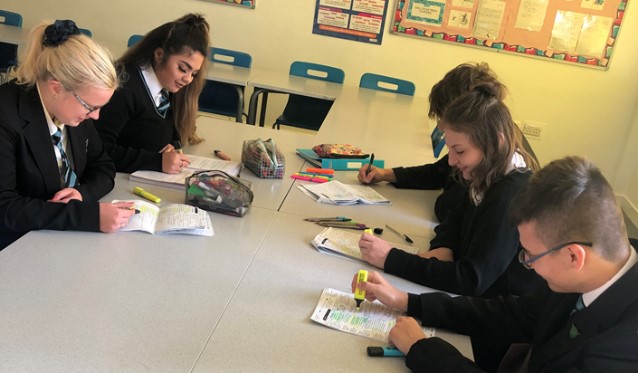 “Brand, burn up, bite into its grace---
He is sure to remember her dying face!”

“  “That’s my last Duchess painted on the wall,

Looking as if she were alive.”

“In one long yellow string I wound

Three times her little throat around,

“And blood and wine were on his hands

When they found him with the dead,”

“It didn't matter anyway...he wasn't made for peace, he couldn't believe in it. Heaven was a word: hell was something he could trust.”

Students are taught a selection of narrative poems by Christina Rossetti.

Students choose their own novel to study.

Studying literature feeds the imagination. It allows you to travel back in time, share the experiences of others, take on new perspectives, explore ideas, beliefs and values, challenge or discover your own and learn the literary skills to express yourself in original and creative ways through dialogue, argument, prose and poetry.

The analytical, interpretative and discursive skills you develop by studying literature will also prove excellent preparation for university. A Level English Literature is a highly regarded qualification by universities.

Jobs where English Literature would be useful include: